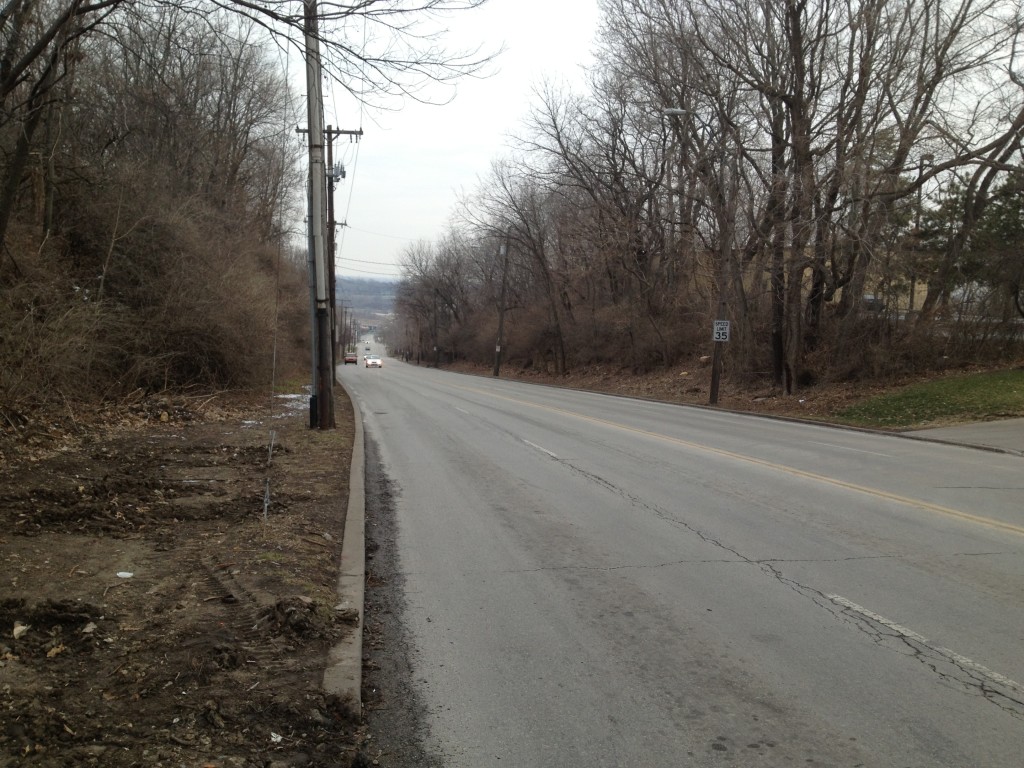 31st and Southwest Trafficway, looking west towards Southwest Boulevard. No sidewalks, overgrowth of flora, trash and debris – and the road itself is in poor condition. Not the best introduction to our neighborhood.

31st Street, from Southwest Boulevard up the hill to Southwest Trafficway: Dodge the big pothole at the intersection of 31st and Roanoke. Watch out for pedestrians in the street. In fact, just stay in the left lane, because the curb lane is one dip or pothole after the other.

Most of us take the condition of 31st Street for granted by now. But consider for a moment that this stretch of road is the first impression for visitors arriving to Coleman Highlands from the south on I-35. That’s a bad impression.

Fortunately, plans are underway to do try to do something about it. In 2009, Dean Realty, the largest property owner along 31st, submitted a request for PIAC (Public Improvements Advisory Committee, City of KCMO) funding to build a sidewalk to address the most urgent hazard. Coleman Highlands supported the request. The city said it was too expensive. After negotiations with the city to divide the sidewalk construction into multiple phases over several years, the project stalled after failing to secure funding. Despite lack of funding for the sidewalk project, Dean Realty cleaned up the illegal dump site at 31st and Jarboe at its own expense and cleared the overgrowth along the south side of the street near the top of the hill (Fox 4 owns the north side), allowing a safe “shoulder” for pedestrians and reducing area for litter to accumulate. Dean Realty management and employees personally keep trash bags and rubber gloves in their cars and pick up trash every time they drive up the street.

Last summer, Dean Realty assembled a meeting of 31st Street stakeholders. The purpose was to leverage unified support of business and property owners to secure PIAC funding to build the sidewalk and resurface the street, as well as encourage maintenance and improvements to all properties by their owners. Dean Realty has branded this effort “Project 31.”

The most recent PIAC Request, dated 9/17/2012 details the nature of the problems and some proposed solutions in five phases:

“The absence of sidewalks, poor curbs, no crosswalks, and poor lighting makes for less than safe travel for pedestrians along 31st from Southwest Traffic way to Southwest Boulevard. The corridor is also less than aesthetically pleasing to the eye. The addition of anchored trash receptacles and minimal landscaping will greatly improve the corridor appearance. While the estimate for these improvements, prepared by the Public Works Department of KCMO, exceeds $800K, the stakeholders’ immediate request, is for 1 of 5 phases. This application, Phase 1, is for less than $200K.”

According to the kcmo.org website, the status of this request is “currently in progress”.